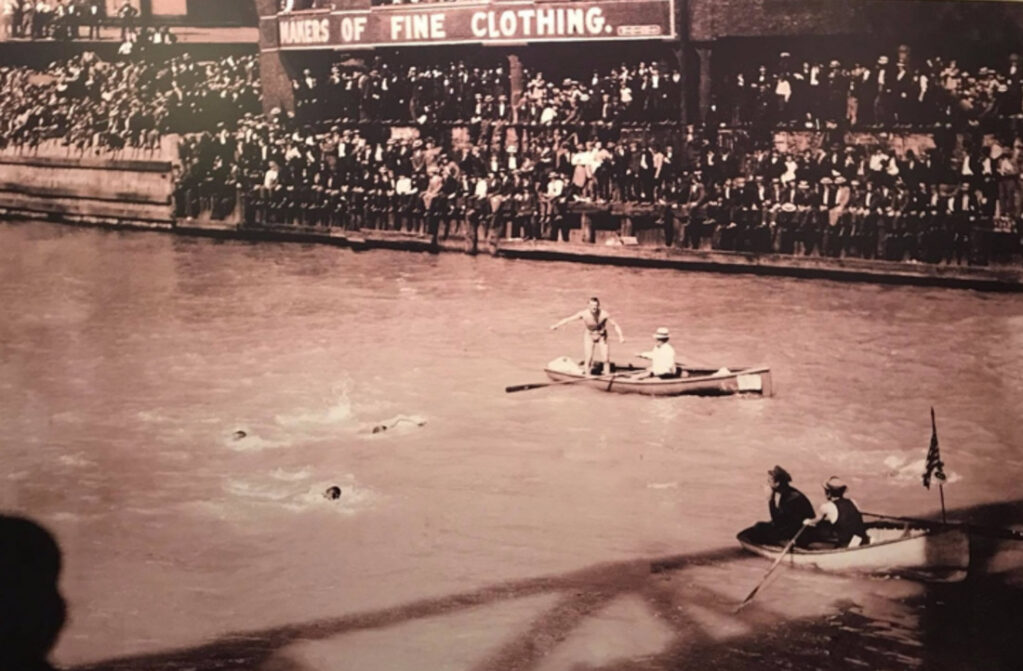 Chicago wouldn’t exist if not for the Chicago River. Starting in the early 1800s, the River was a thoroughfare for exploration and then trade. By the 1880s, it was an open sewer for the growing city with 700,000 residents. The River flowed into Lake Michigan that was (and still is) the source of Chicago’s fresh water, and cholera and typhoid became commonplace.

In a remarkable feat of engineering, the flow of the Chicago River was reversed in 1900 to take water from Lake Michigan and discharge it through the system of the Des Plaines, Illinois and Mississippi Rivers. By changing its source of water, the River cleaned itself and Chicago was able to grow to its current population of five million.

To celebrate the improvement in the Chicago River, the Illinois Athletic Association hosted a series of open water swims in the River starting in 1908. The swims attracted the highest-profile swimmers in the world (John Weissmuller won the event two times) and more than 100,000 spectators lined the shore. The Chicago River Swim was a jewel in the crown of the young city.

By the late 1920s, industrial discharge and street runoff had polluted the Chicago River again. Environmental activism and legislation (the Clean Water Act and the EPA) of the 1960s and 1970s began to enforce discharge violations, and the Metropolitan Water Reclamation District began a deep tunnel project to handle rainwater runoff. With this “second chance,” the Chicago River once again began to clean itself.

A Long Swim believes that it is time for a second celebration of how the River is clean and wants to mark that celebration by reintroducing an open water swim in the Chicago River. Our goal is to highlight the once-unthinkable rebirth of the Chicago River as a place for recreation. It is a rebirth for which the City should take great pride, and businesses along the River are very enthusiastic about the idea.

The CRS will support A Long Swim’s mission of supporting ALS research at Northwestern University and, as part of the neighborhood focus, will also support an important learn-to-swim nonprofit. A Long Swim has targeted Make A Splash (www.MakeASplash.org) to fund with the Chicago River Swim, which will partner with Chicago Park District to teach 2,000 Chicago children to be water-safe.