A counterclockwise circumnavigation of the most prominent island that makes up New York City.  The legs in the East River and the Hudson River are downstream, and the Harlem River takes the swimmers past Yankee Stadium, where Lou Gehrig played until his ALS diagnosis.

On the morning of June 28, 2014, as the swimmer on the the A Long Swim Team, I hopped into the Lower Hudson River at Battery Park.  It was exhilarating to be in the shadow of the Freedom Tower and within sight of the Statue of Liberty, We quickly swam around the south end of the Island, and zipped under the Brooklyn, Manhattan and Williamsburg Bridges. Floating underneath, those bridges are works of art. We enjoyed the tidal push as we headed north on the East River, sometimes moving at a very brisk five knots.  Past Roosevelt Island at around 110th Street, the East River and the Harlem merge, and the swirling water and tricky currents are known as "Hell's Gate."  We entered the Harlem River, knowing that it had lots of bridges to see, but also knowing that it had the dirtiest water. 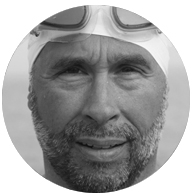