The Catalina Channel is the body of water between Santa Catalina Island and the Palos Verdes Penninsula, and is west of Long Beach, California.  The Catalina Channel is filled with ocean-going container ships, rapidly falling water temperatures, sharks and stinging jellyfish.  The swim starts in pitch darkness and ends on a very rocky and treacherous beach. 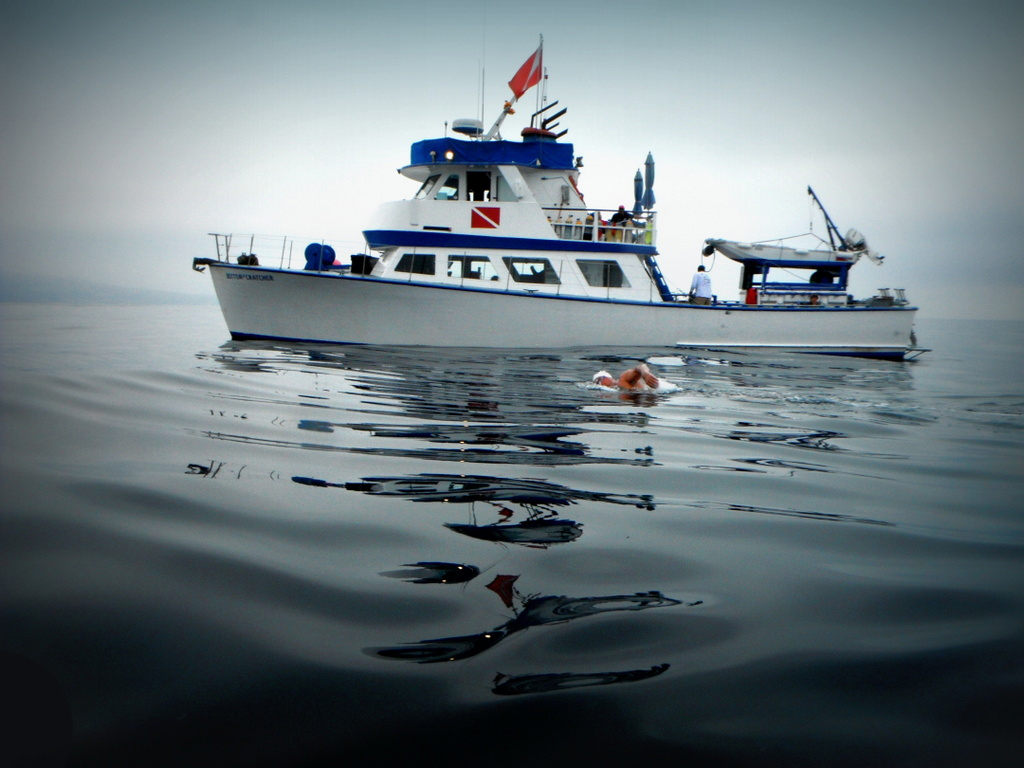 Catalina Channel View From The Kayak

Catalina is a very challenging swim. It is every bit as challenging as the English Channel, and deserves its reputation in the open water swimming community as one of the most difficult swims in the world.

We started a couple hours later than we had originally expected due to some calendar coordination, the result of which is that we hopped into the water at the Island about 12:45 a.m. on Thursday, September 27th.

The water was 68 degrees most of the way, which was cool but very manageable. We had heard about the temperature drop in the final three miles, when the water temperature dropped to 62. Maybe because the change was so abrupt, or maybe because I was starting to run out of gas, but it felt a lot colder than that.

I had done a series of calculations prior to the swim, and had expected that my time window would be between 10 and 13 hours, depending on conditions, and that the 21 mile swim would require about 30,000 strokes.

As it turned out, conditions were perfect, and yet my time was at the upper end of the time window, and I took 36,719 strokes.

Along with the perfect water conditions was the fact that we were accompanied in the water by some interesting wildlife.  Our boat pilot had told us to watch for seals and sea lions, because Great White sharks will often be nearby.  As it turns out, we saw a number of seals (which is a surprisingly large beast when you’re swimming right next to one) but were fortunately never visited by sharks.  Conditions must have also been perfect for jellyfish that day in Catalina, and there were multiple times when I was stung every ten or twelve strokes for a mile or so, only to be followed by a couple of miles of no jellies at all. Then, back to the zingers. You actually become accustomed to being stung on your shoulders and chest, but being stung on the face really smarts.

The crew on the escort boat was outstanding. My son Gordy had teasingly referred to them as the “B Team,” but they sure performed like they were All-World that night. In addition to all of the regular team responsibilities (feeding, stroke counting, log keeping, general fretting) they also did rotating shifts in a kayak that provided a lane in which I could swim. That takes a strong constitution, and they never flagged. Paddling a kayak in the open ocean. Susan herself took a four-hour shift in the kayak in pitch black darkness, and has announced that she is not ever doing that again.

I am once again overwhelmed with the feelings of gratitude, humility and good fortune that allowed the A Long Swim team to be there in the first place. I am a very lucky guy, and never has it been more clear that in those 12 hours in the Catalina Channel.